Not So Fast, Buster! 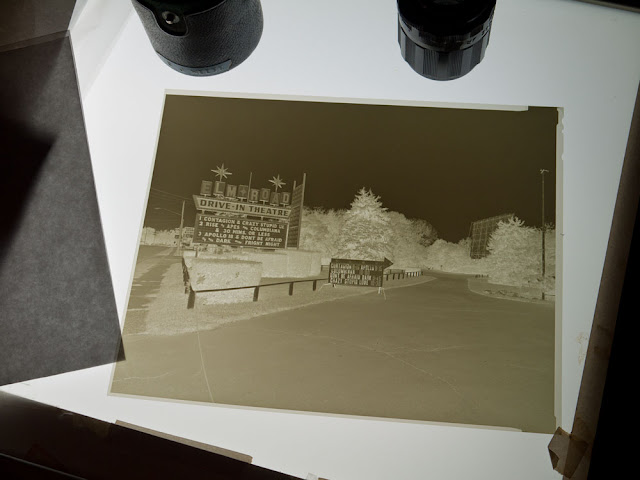 Woodbury, Connecticut
My plan was to do another set of eight sheets of film, then mix a new batch of PMK pyro part A (film developer) and let it sit overnight before another developing session tomorrow morning. But when I poured 30 ml from nearly the last of my current bottle of PMK into a small graduate, it came out brown instead of amber. Oops! PMK has an extraordinary shelf life (because it's kept in two parts which are mixed just moments before use) but I sure wasn't going to trust brown solution. So the trays and stuff got put away and I mixed the new batch of PMK. Then weighed out half a dozen measures of 18 grams of sodium metaborate and sealed them in suspicious-looking little plastic bags. This (white powder) chemical is the second part of the PMK developer, and 18 grams of it is enough to make 3 liters of working solution, which is just right for handling a set of 8 8x10 sheets in an 11x14 tray.

The negative on the light table was made at the Elm Road DI theater, and is the same subject, but quite a different camera position, from the picture in this blog post (http://workingpictures.blogspot.com/2011/09/elm-road-drive-in-theater.html) made from the road during the trip. The very not-neutral-gray color of the negative is the pyro developer at work. The greenish-brown "stain" is proportional to the amount of reduced silver, and the stain is an excellent blocker of UV light. This makes a negative that has plenty of density range in the UV spectrum so that it will easily print in the very long scale Pt/Pd process. But it also can be printed successfully in silver-gelatin, and is scanner-friendly as well.

The two black things at the top of the frame are a Super-Takumar 105mm f/2.8 lens and its leather case, which I bought in 1966. The focus ring on this 45 year old lens turns smooth as silk, though it has never once been serviced. Now, I use the lens as a loupe to examine negatives. It has just the right amount of magnification and focuses from a comfortable distance several inches away from the neg. BTW, making this capture from a fairly oblique angle makes the light box look a lot worse than it really is. That severe falloff at the right would not be there if I'd pointed the camera down directly from above.

A last note. The lens used to make this negative is a 165mm Super Angulon, which I bought—used—back in the mid-80s. I actually did quite a lot of commercial work with it. It was perfect for a certain style of wide-angle studio still life work that quite a few clients came to me for back then. I recall the first assignment I shot with it—a centerfold of machine parts for a corporate capabilities brochure—covered the $1200 cost, so it's been a free ride since then. The wide field of view and superb coverage (the lens is huge) have made it a wonderful tool for landscape and my vernacular architecture subjects.
Posted by Carl Weese at 5:21 PM