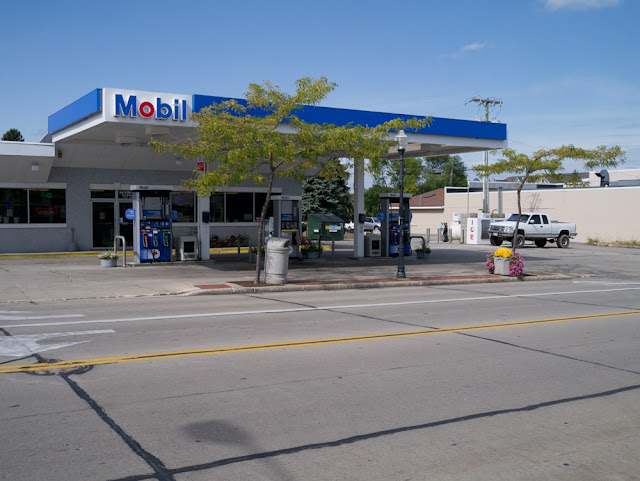 Sturgeon Bay, Wisconsin
Posted by Carl Weese at 6:00 AM

Really enjoying your trip! Hope you can keep up the posts!

That is great gas station picture.

Have you or could you write about the handling of the G3. As I recall you use/d the GF1 with the clip on EVF. How do you like the EVF on the G3?

The clip-on EVF is the weak point of the GF1. The G3's EVF is vastly superior. It's not the same as an SLR finder—better, in some ways, worse in others—but it's extremely usable.

The camera is so small that it takes some getting used to, but then I've never understood the notion that a camera was supposed to feel good in your hand immediately or you won't like it. Tools have to be *learned*. I can picture Carl Sr. chuckling in Valhalla at that. There are some things about the GF1 that I miss, like less need to go to menus and more solid-feeling controls, but the G3 is a very usable machine, and the sensor is a rather stunning advance over the GF1, which was no slouch to begin with.

This reminds me of another of my burgeoning list of pet peeves...city trees. These poor plants are doomed to live a shortened and stunted life. Trees need a certain amount of ground around them to get enough water from the ground to thrive...generally twice the area that the foliage of the adult tree will spread to. It's become the standard in America to plant trees that poke up out of the concrete with tiny little areas of water collecting ground around them...it's really too bad that this isn't better understood.

Thanks for the reply!!!