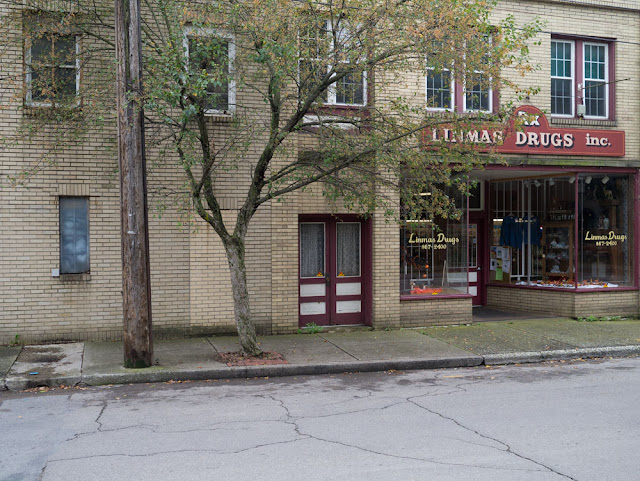 Emlenton, Pennsylvania
Well, I've finished developing my 8x10 film. Next comes the 7x17. Now for some statistics that I find kind of interesting in thinking about different ways of making photographs. On the eleven-day expedition, which covered about 3,400 miles, I shot 30 810 and 29 717 HP5-Plus negatives. Essentially all of them were on the drive-in theater project. I was "seeing" that in b&w, as I have for a dozen years now, while I was seeing the towns and buildings and farm fields that I traveled through entirely in color, and so making color digital captures. I also did a lot of captures at the theaters, sometimes because I really wanted to deal with a particular subject in color, other times simply to record things that I didn't see as finished pictures but wanted visual reminders about.

On the large format pictures the panoramic format ones were all done with a 305mm G-Claron. I had a 250mm and a 355mm available, but never used them. On the 810s, one was made with a 165mm Super Angulon, one with a 14-inch Commercial Ektar, and all the rest with a 240mm Apo Sironar S. On the free film front, I made 2,567 digital captures. Something unusual for me, it looks like I shot at least 2:1 with the 14mm, maybe even 3:1, when generally I use the 20mm more often. (I really want something in between, and will probably get the Oly 17mm at some point.) Using the wider lens might have been something about the DI subject matter, though I shot a lot of other subjects with digital capture, or maybe the expansiveness of the mid-western landscape compared to my usual local southern New England territory. Sometimes a little analysis like this gives me some ideas about why I might doing things a certain way at the moment.
Posted by Carl Weese at 5:34 PM

James, hmm. The 8x10 alone would be $123,000 just to buy the film. More important it would be, like, three lifetimes to develop the negatives...