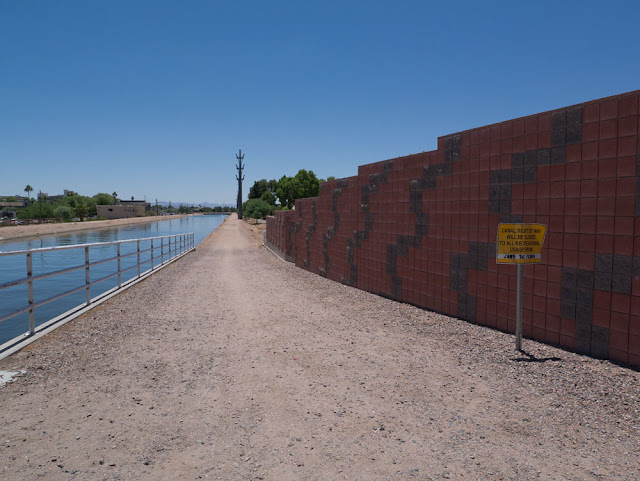 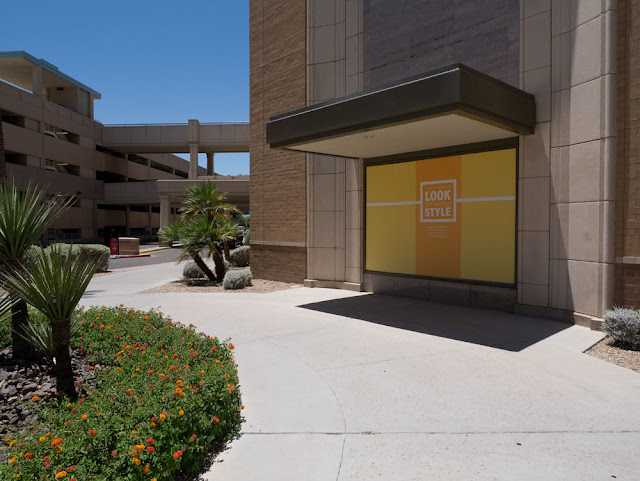 Scottsdale, Arizona
Posted by Carl Weese at 9:40 AM

I'm mystified by the top picture (and can't read the bottom two lines of the sign). Is the wall there to protect nice houses from the noise of jet ski traffic on the irrigation ditch?

The wall is clearly decorative but I don't recall what's on the other side. There's a busy street right behind the camera position. I don't think there's any traffic on the canal but I'm sure the right of way is used by runners and walkers, etc.

Since somebody asked, some add'l info:

Behind the decorative noise wall is residential housing.

While the paths on both sides of the canal are generally open to the public, boating/swimming/fishing in the canal is strictly prohibited.

As for your second photo (and yesterday's photo outside Starbucks), you likely didn't see the signs posted at the edge of the property (in fairness, they're fairly small), but photography is prohibited on Scottsdale Fashion Square mall property. Although the streets and sidewalks around the stores appear to belong to the public, they're actually private and the mall's security guards zealous patrol them. Go ahead ... ask me how I know this! 8^(

JG, I didn't see the signs, but I actually did feel that the area was like a commercial outdoor mall rather than a regular city street. I've run into this a couple other places. I didn't notice a security presence during the time I was in that section, and then of course the way I work when makings pictures like these is pretty inconspicuous.

Carl, the shopping mall is a threat to personal freedoms, including photography. Malls are corporate owned, and are not public space. The corporations can make up any silly rules they wish infringing on personal freedom which are not open to public debate, input, or comment, and malls have the legal right to enforce these "rules" however they wish. Mall security is private as well, not subject to regulation or oversight as police are. The dominance of shopping malls replacing main street stores, especially in suburban communities, is perhaps the major threat to American personal freedom.

Actually this goes back quite a while. Nearly 40 years ago I was assigned by "Delaware Today Magazine" to illustrate a story about a novel fully enclosed shopping mall just recently built. We needed to get a fancy letter of permission on the mall owner's letterhead to show to security while I worked. Problem was, the security people were too dumb to understand the letter, or even recognize the logo of the company that owned the mall...