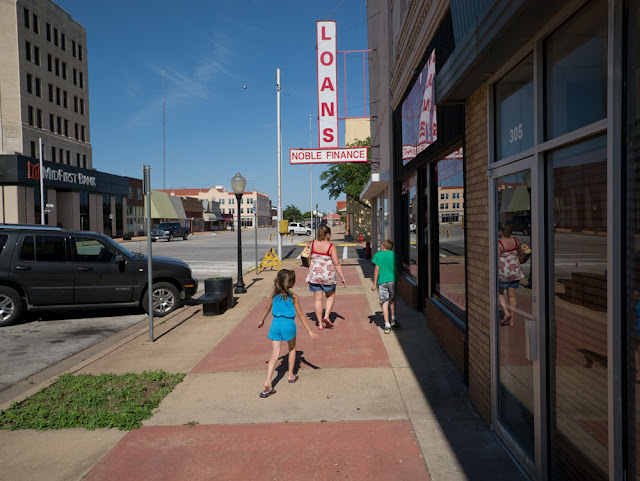 My "off topic" shooting on the six-week expedition consisted mainly of looking at Small Town America in parts of the country I've never been before, along with color landscape work. Kansas yielded a lot of this, partly because the landscape and light interested me (even if the wind drove me nuts), and because by the luck of the draw, I drove through or spent the night at several interesting small towns. 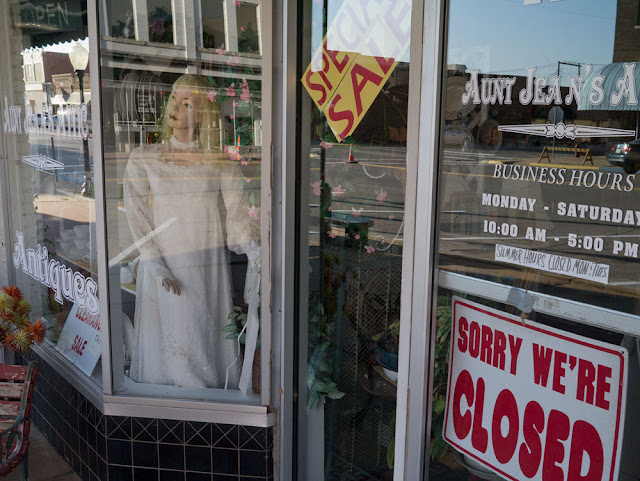 Oklahoma was less productive, and I've been trying to analyze why, for future reference. If anything, I thought the landscape was more interesting, but the locations of the theaters put me on Interstate highways a lot of the time, while I'd been mostly on secondary highways—where you get to see whether a town is interesting enough to stop and look around—in Kansas. I wound up at, and sometimes had to stay overnight at, larger cities in Oklahoma. Bigger cities don't interest me as much as small towns, but more important, on a trip like this there is no time to find the interesting part of a city. If the two-lane highway goes through a medium sized town you can park, walk around for twenty minutes, and have a productive shoot if things go well. From the Interstate, passing a larger city, even if you spot something that looks like it might be an interesting district, it could take half an hour just to get off the road and find a place to park.

Chickasha, home of The Chief drive-in theater, was kind of perfect. It's small but interesting enough that while finding my way to the hotel I saw several different spots I wanted to come right back to for pictures. I did photo walkabouts both evening and morning, then over the next couple days posted several pictures from the road. In my current edit of the off-topic material I turned up another couple pictures that seem to fit right in with the ongoing "Working Pictures" thematic material, with the twist that I think it's pretty clear these weren't made near my home base in Connecticut.
Posted by Carl Weese at 6:00 AM

Email ThisBlogThis!Share to TwitterShare to FacebookShare to Pinterest
Labels: behind the scenes, shop windows, small towns