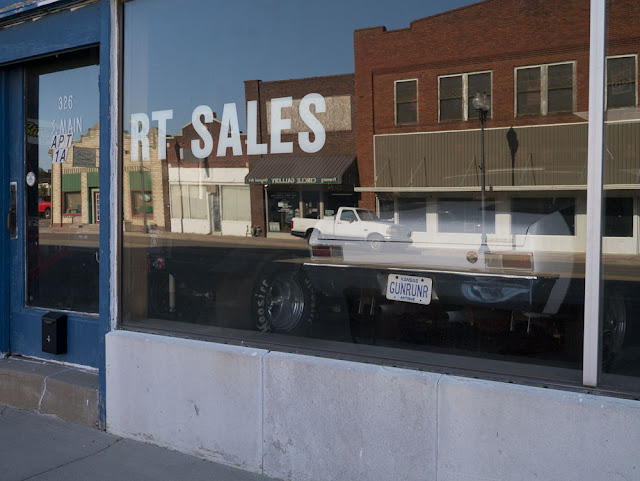 GUNRUNR's muscle car dates all the way back to when I was in high school in New Jersey, where inexpensive hot cars were quite popular. You encountered a few Corvettes, a GTO now and then, but a Chevy II like this one, with a 396 crammed under the hood, was a lot more affordable. 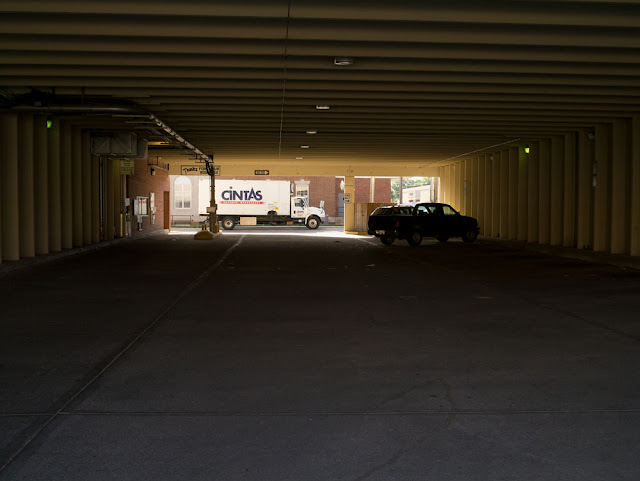 Look carefully at the left side of this picture and you'll see that the reflections are from the glass of a drive-up window. I made a couple of pictures of this weird ground floor, street level, parking area under the, you know, actual building, because it seemed strange. As I turned to continue along the sidewalk, an officious little man in his thirties, wearing a cheap-looking suit, bustled after me and—politely—demanded to know why I was taking pictures of the bank. This sort of thing happens now and then if you spend a lot of time making pictures on the street.

"Bank? Looks like a parking lot to me." This wasn't the response he was looking for. "Don't you see how it would be a security concern for the bank for you to take pictures of it?" He handed me his card. It had a bank logo, but he wasn't "security." It listed his position as Wealth Management Adviser. Looking at that suit I wondered how familiar he might be with wealth.

At the nearby drive-in theater I'd spoken with the owner's father, who introduced himself by saying, "I pastor mega-churches." He was helping with the theater his son had recently bought, especially on dealing with the business end of things. The son, a medic in the Army Reserves, was on deployment overseas. The pastor, and temporary drive-in theater manager, described the local demographic as being mixed, with quite a few poor folks, but also quite a lot of, "upper-middle class—you know, people making $30 or $40 an hour." There's aircraft manufacturing in the area, and a number of prisons, which of course, employ prison guards.

On the sidewalk at 8:35 the next morning, Mr. Wealth Management seemed flustered by the fact that I didn't act flustered at all that he had accosted me. He was no longer interested in finding out why I was taking pictures, but was terribly concerned to get me to admit that he had been correct to ask me what I was doing. He began to repeat, "you'll at least agree that taking pictures of a bank is outside the norm, won't you?" He slipped into some concern trolling, warning how people could get really upset with me for what I was doing. Then more "outside the norm" thing. I finally told him that I'd agree with him that walking around town taking pictures might be outside his norm but that he'd then have to agree with me that taking pictures from the public sidewalk is an activity protected by the First Amendment. His eyes seemed to get a little unfocused for a bit, then he agreed, though not without another round of trolling on how I should be more careful. Then he wandered, looking a little dazed, back toward the bank entrance. 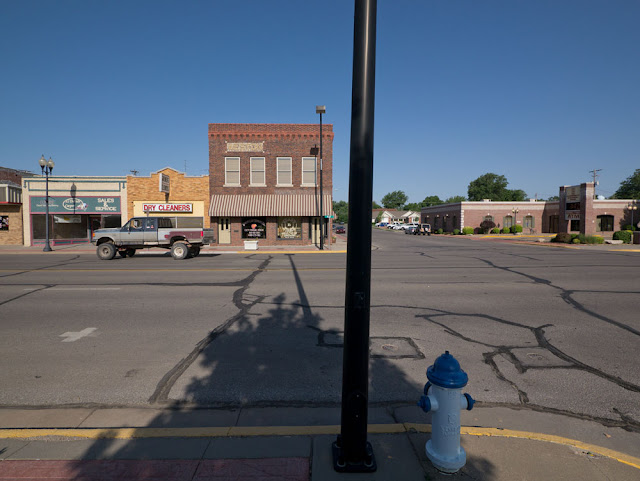 I guess white and blue fireplugs is inside the norm, in El Dorado, Kansas. 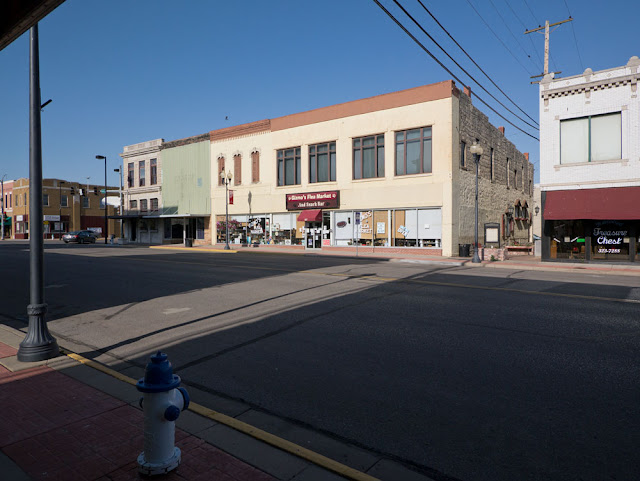 El Dorado, Kansas
Next stop, Oklahoma.
Posted by Carl Weese at 6:00 AM

Email ThisBlogThis!Share to TwitterShare to FacebookShare to Pinterest
Labels: behind the scenes, shop windows, urban landscape