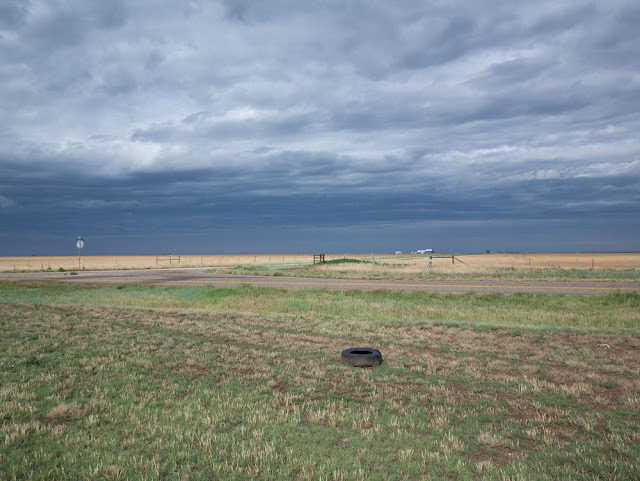 Heading south from Amarillo the morning of June 5, I ran in and out of rainstorms on the highway, nearly the only rain I encountered in six weeks, and the storm cloud formations once again struck me as fascinating because of the way they formed up over a distant horizon, a thing that simply isn't seen back on my home turf. 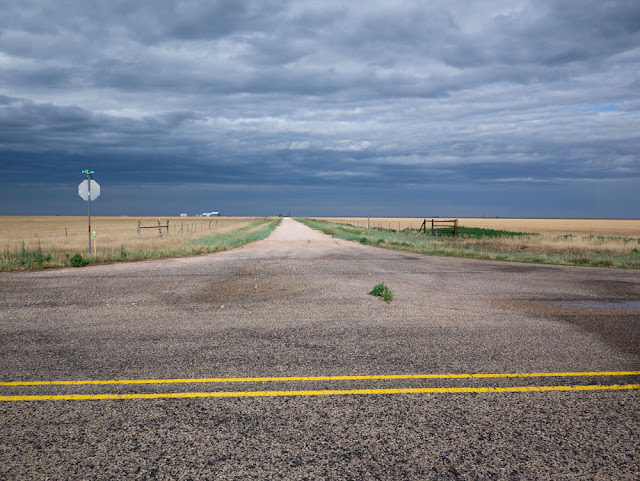 When I'd finished up working at the DI theater in Amarillo, I mentioned to the owner that the next stop was Lubbock, and since it was only late afternoon maybe I'd move a little south. No, no, he told me. There is nothing between here and Lubbock. You will be stranded. So I back-tracked five miles or so to "hotel row" at the north end of town, and took a chance on a Motel 6 where I got an inexpensive first-floor-park-at-the-door-walk-in room (see previous posts why that matters) that was bare-bones but neat and clean, with fridge and microwave, plus—a thing not always to be depended upon at Motel 6, the WiFi that costs an extra $2.99 actually worked. It also had what I guess passes for a "small" flat-screen TV. I don't watch TV. It annoys me when I'm paying a hundred dollars for a room to see the giant flat screen TV that I can't avoid paying for and would gladly take a room without the stupid boob-tube if I could get it for less. Dream on.

As on my time there twenty years ago, I found the landscape of the High Plateau fascinating this time as well, and have some serious thought of going back to address it directly. Not just here, but for much of this trip, I can regard the time I stole from the main project as a sort of sketchbook.
Posted by Carl Weese at 6:00 AM

I love this image. This would make a great print.

You have mentioned, more than once, how often you take a picture and turn around and find another. Your DI trip has sort of done the same. Your peripheral photography is wonderful. You were so focused on the DIs that your other work just seems to flow.

Earnie and James, thanks.

I felt that I needed to pay serious attention to off-topic, peripheral work not just because these were places most of which I'll never see again, but in order to stay fresh on the main subject. The DIs are "variations on a theme" and it's vital to see the variance in order to photograph what's important at each venue. Between the two it got a little crazy, but there's nothing like total immersion to find "the flow."

We've lived in the deep South, St Louis, Oklahoma City, and for almost 30 years the Northeast. I'd mostly forgotten about wind, horizon, dirt roads and small towns past their prime. Your trip has taken me back to places way back in my head. These two photos are just lovely. I follow them all, but time to stop and say thanks. The all black Oklahoma towns were another revelation. Lived there and never heard od them.