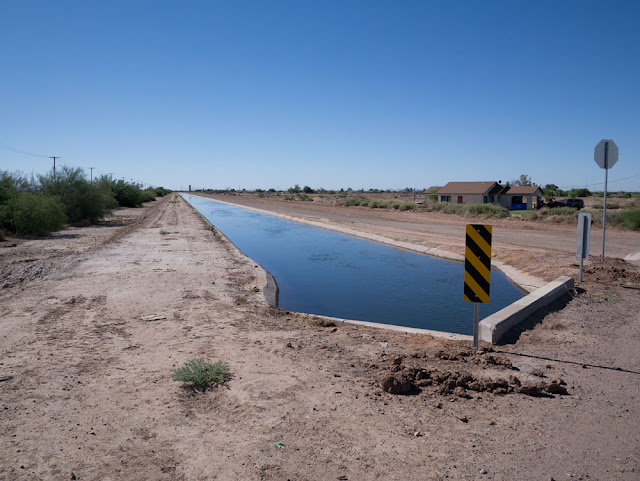 I'm fascinated by irrigation. To the point of wondering if I can come up with an organizing theme for a large scale photographic project on the subject.

Back on June 9-10, just about the halfway point of the Giant Road Trip, I got to spend two days "off the road" enjoying the hospitality of a friend in Scottsdale, AZ. Not exactly time off though. I spent hours writing the TQ postcards for Kickstarter project sponsors and many more hours working on the itinerary for the second half of the drive-in theater trip.  Also continued attempts to make contact over the internet with the upcoming theaters. You can't do it by phone because the phone number just leads you to a "what's playing tonight" recording. Regular mail doesn't work because the theater address is almost never the official postal address—with some exceptions, nobody lives there. Letters just come right back. Not many theaters seem to read their email, or check the result of the Contact buttons on their websites, or even monitor Facebook pages devoted to them, though that last surprised me by yielding more direct contacts than any other route. 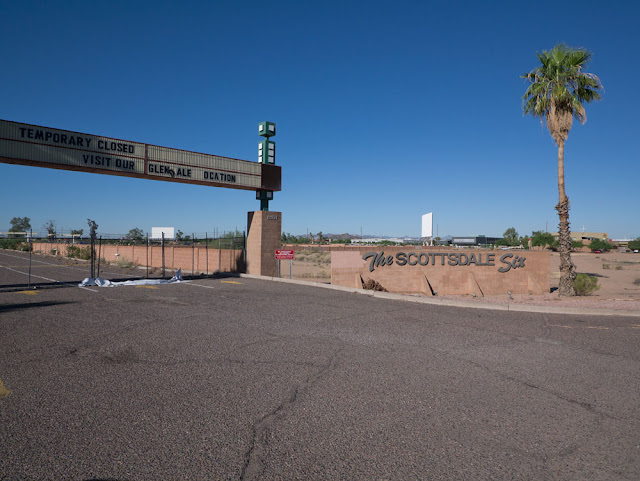 Aside from the illiterate and maintenance-free message on the gateway, I found it interesting that this closed theater is evidently owned by the same chain as the Glendale 9. Glendale is part of the complex of cities including Phoenix, Scottsdale, and several others, where only a technical/political distinction lets you know they are different entities. Driving around, you have no more sense of going from one town to another than you would driving through the densely populated Hudson County Peninsula of New Jersey. I haven't yet found out whether the chain bought or built the two theaters—the style of their construction suggests they are not old—but clearly 15 screens was too much for Phoenix Metro and they shut one of the theaters down. A recent New York Times article informs us that the chain is intending to make the conversion to digital projection to keep open the theaters it hasn't already closed. 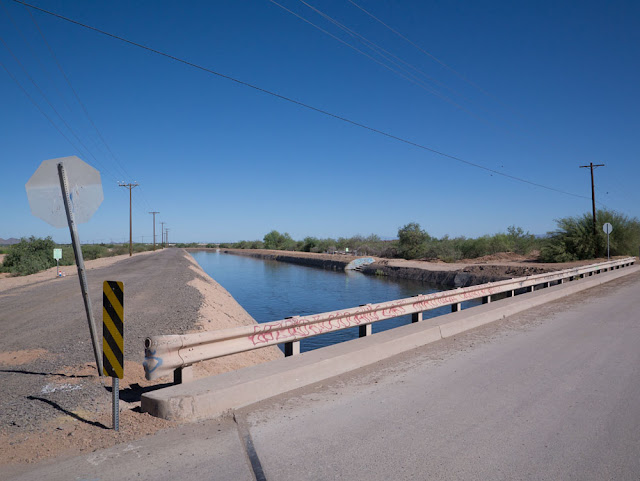 Back to irrigation. My host's kitchen sported an indoor/outdoor weather thing, which in mid-day typically said something like "outdoor—106°/7%, indoor, 80°/11%. Those are the conditions under which corn crops are being grown with irrigation. I need to do more research but my basic take on this is that it's madness. The open trough canals are already there, may even be simply the downstream of the ones I photographed in Wyoming ten years ago. I really want to research how much of this stream simply evaporates.
Posted by Carl Weese at 6:00 AM

when the Central Arizona Project was first planned, they estimated that vast amounts of the water taken from the Colorado into the Phoenix area would be lost to evaporation. Some predicted that by the time the water got to Phoenix, it would be too salty to use. Not sure how that turned out - they did build it, however. I am reminded of the great, Sam Kinison's routine about sending money to Africa to help with the drought: "...you want help these people, don't send them money, send them luggage, YOU LIVE A F..... DESERT...MOVE". Carl, did you get to TEMPE and see the 'lake' in the DRY Salt River bed? Now that makes sense! Oh, btw, years ago those towns mentioned where all separated by desert - now combined by urban sprawl.

Lyle, I read up a little on this back in 2002 after seeing the large open canal irrigation system in Wyoming. One informed opinion I encountered was that, leaving aside a subsistence/aboriginal lifestyle, people just shouldn't try to live in a place that has less than 20 inches average annual rainfall. Just checked, Scottsdale gets 9.65....

That does sound like foolishness - running water that far in those conditions. Of course the narrower and deeper the channel, the better to insure as much as possible gets the to the destination.