Fields, Skies, and a Couple of Hills 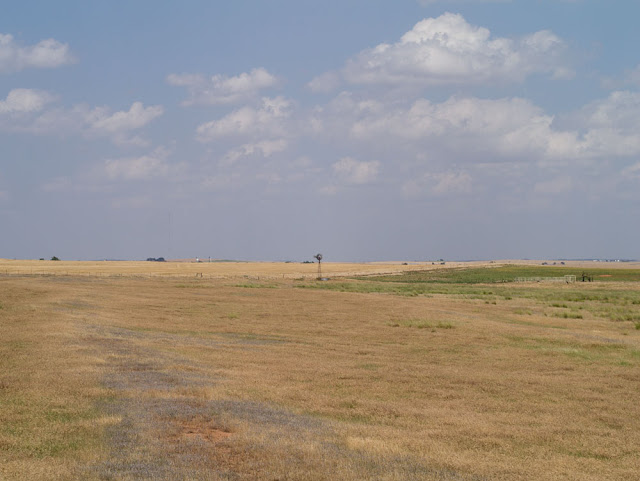 Almost as soon as I crossed the state line into Oklahoma, the land got a little less flat, and the wind a little less intense, than in Kansas. Wind power, both old and new, continued to be in evidence. I'd found the wind really bothersome. I know a few people who totally, absolutely, can't stand rain. They'll do anything to avoid setting foot outside in wet weather, a downright irrational aversion to something that, after all, is perfectly normal and mostly harmless. Unrelenting hard wind prompted a somewhat similar reaction, or perhaps over-reaction, in me. I really, really, hated it. The wind set in the minute I left Kansas City to head for Kanopolis, and never let up from then on.

Still, I managed to have good shoots at five different Kansas drive-in theaters, including extensive coverage of evening "block party" activities at two of them. Almost all of it had to be digital capture though, because only once, just after sunrise at El Dorado, was there a moment when the wind was quiet enough to use an 8x10 or 7x17 inch view camera. In fact, even with a small digital camera set on a massive 13.5 pound Gitzo tripod, when I carefully used the rear LCD screen not for viewing but as a mirror to look at a reflected object, I could see the camera was quivering in the wind (you can do the same trick with the shiny back of the ground glass on a view camera). Wrapping my hands around the camera and tripod head, forcing down against the ground, was the only way to keep the camera still. 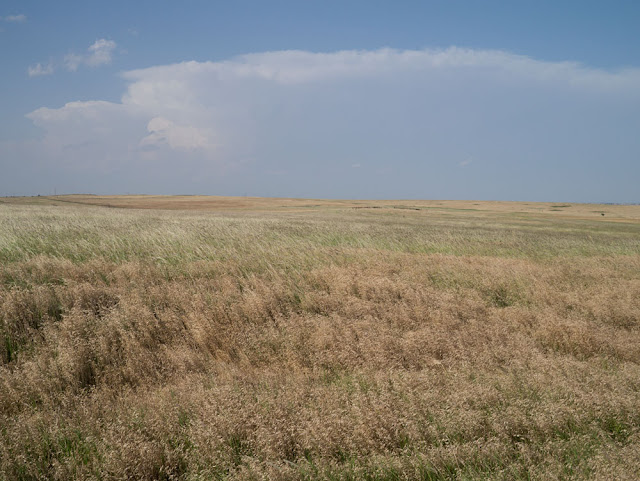 For landscapes I usually just hand held the camera at a high shutter speed and squeezed off multiple frames (thank goodness for digital 'free film') counting on some of them coming through. It was also interesting to record how the patterns in the grass or croplands changed second by second as the wind shifted. At Ponca City the Airline Drive-in was closed but still standing. I thought there might be a good view of the theater and surroundings from a distance away, across some fields. This didn't really pan out, but while parked there I got out the MacBook to look up some material about the next theaters, and was alerted that I had a free connection available to the Ponca City public WiFi system. This was way out on the outskirts of town, so quite a surprise. Nice to check email and do some live research online. 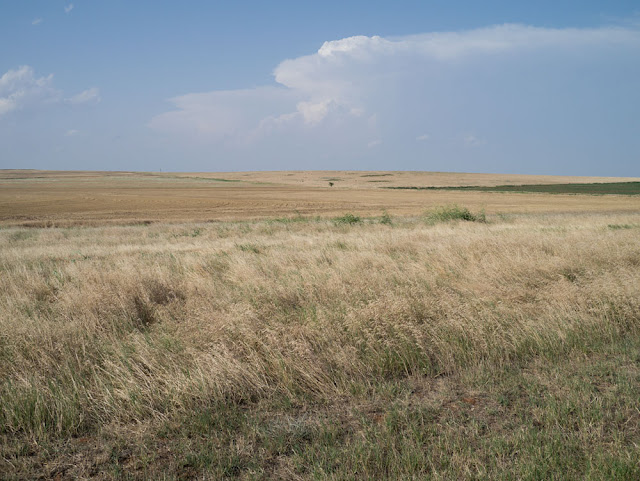 Next stop was The Beacon, at Guthrie, OK. Then down to Weatherford where research showed that a theater had closed a couple years ago but was still in good repair. So much for research. The clerk at a convenience store on the short section of Old Route 66 that goes through town told me it had just been torn down a few months ago. Nothing left but an empty field. There didn't seem to be anything to the town of Weatherford except a commercial strip of all the usual chain outlets, surrounded by residential subdivisions. The nearby agricultural land looked a lot more interesting so I spent the early evening tooling around trying some landscapes. There was actually rolling land, and the wind was so diminished I could stand reasonably still without bracing myself against the car. The sky and cloud colors still seemed strange, as they had in Kansas.
Posted by Carl Weese at 6:00 AM